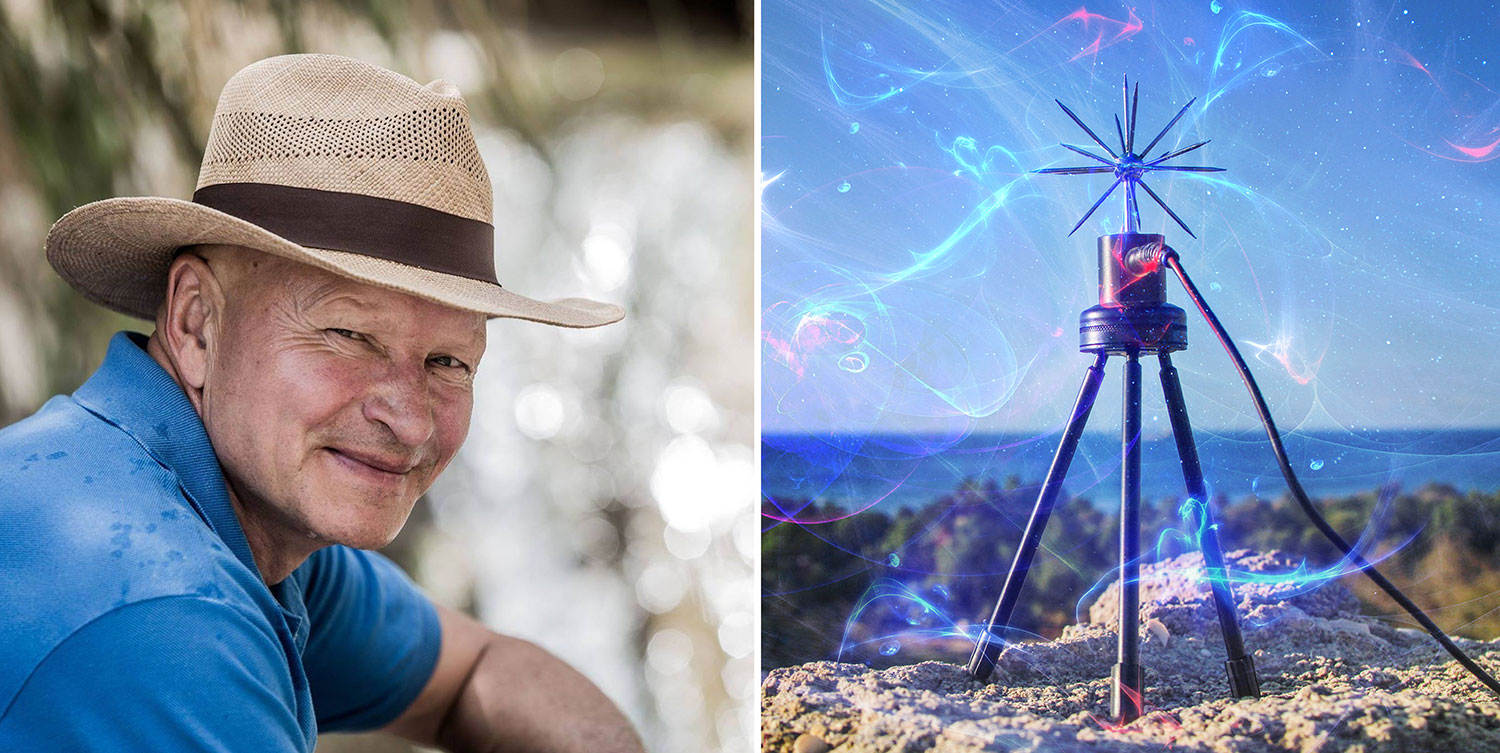 Indications for the Application of ELECTROPHOTONICS in Medicine

The use of the medical technique of ELECTROPHOTONICS is advisable during medical screening examinations, conducted with a view to providing timely and controlled primary prophylactic actions.

The application of the technique also provides a rapid method of assessment for monitoring the functional state of the organism during treatment and rehabilitation, for preventing the side effects of various therapies, for determining additional indications for allopathic, non-drug, and homeopathic treatment methods, and providing a more objective assessment of their effects.

Water clusters are not monuments immortalized in stone; they are dynamic processes that constantly change and constantly reproduce themselves in a never-ending variety of their elements.

Modern notions about structures in liquids were formed from two directions: on the basis of experimental data and from quantum-mechanical computer modeling. When the results of both methods match, scientists rejoice and their ideas become actively and widely discussed. With liquids, structure takes on a different meaning as compared to the structure of solid objects. Molecules in liquids must move constantly, but at the same time they can maintain a certain order by grouping into the so-called non-crystalline clusters. During thermal motion at room temperatures these clusters behave like a single entity for a long time when traveling through the liquid. Although this disrupts the long-range order, the short-range order is still maintained.

Currently, considerable attention is being focused on the study of the structural properties of water and the possibility of data transfer through water. A lot of controversial information we may find concerning the memory of water (Johansson, 2009). According to the viewpoint that has shaped, the phenomena observed during the experiments are determined by the processes of clusters and clathrates formation, mainly at the atoms of admixtures (Del Giudice, Vitiello, 2006, 2010). The task of introducing these notions into the scope of contemporary scientific thinking requires, first of all, a set of probative and reproducible experimental facts. Water is a complex subject of study, and its properties depend on a great number of factors; this requires that several independent techniques should be used in parallel, and that new informative methods for the study of water properties should be developed and introduced into practice (Voeikov, Del Giudice, 2009).

The high degree of informativeness of the Dynamic Electrophotonic Capture (EPC) Analysis based on Gas Discharge Visualization (GDV) method (Korotkov et.al, 2002, 2010;) applied for studying liquid-phase subjects was first demonstrated during the study of the glow of microbiological cultures (Gudakova et al, 1990), blood of healthy people and cancer patients (Korotkov et al, 1998), reaction of blood to allergens (Sviridov et al, 2003), homeopathic remedies of 30С potency (Bell et al, 2003), and very small concentrations of various salts (Korotkov, Korotkin, 2001). The differences between the glow parameters of the NaCl, KCl, NaNO3 and KNO3, solutions and distilled water were observed until the 2-15 dilution; however, the dynamic trends of the 2-15 dilution and distilled water still had different directions.

Great interest has been roused by the studies directed at detecting the differences between the glow of natural and synthetic essential oils with identical chemical composition (Korotkov et al, 2004). The oils were analyzed in order to detect possible differences between oils that were obtained by means of natural and synthetic processes, between oils of organic and regular origin; between oils obtained in different climatic conditions and extracted by means of different methods; between oils with different optical activity; between fresh oils and oils that were oxidized by various methods. The combinations of oils under study did not show any statistically significant differences when analyzed by means of the gas chromatography method.

The study of electrophotonic parameters of liquids is based on measurements recorded using a GDV Camera. The camera is well-known for analyzing stimulated photon emissions from human fingers, which is being used for health and well-being diagnostics (Measuring 2002), analysis of athletes (Bundzen et al. 2005), of altered states of consciousness (Bundzen et al. 2002. Korotkov et al. 2005), of the influence of music (Gibson, Williams 2005) and Qigong to people (Rubik, Brooks 2005), as well as of geo-active zones (Hacker et al. 2005) and minerals (Vainshelboim et al. 2005).

When the GDV/EPC parameters are measured for liquid subjects, a drop of the liquid is suspended at 2-3 mm distance above the glass surface of the optical window of the device, and the glow from the meniscus of the liquid is registered.

The temperature is kept in the range 22-24 C, the relative humidity is maintained from 42% to 44%. The train of triangular bipolar electrical 10 mcs impulses of amplitude 3 kV at a steep rate of 106 V/s and a repetition frequency of 103 Hz, is applied to the conductive transparent layer at the back side of the quartz electrode thus generating an electromagnetic field (EMF) at the surface of the electrode and around the drop.

Under the influence of this field, the drop produces a burst of electron-ion emissions and optical radiation light quanta in the visual and ultraviolet light regions of the electromagnetic spectrum. These particles and ions initiate electron-ion avalanches, which give rise to the sliding gas discharge along the dielectric surface (Korotkov, Korotkin 2001). A spatial distribution of discharge channels is registered through a glass electrode by the optical system with a charge coupled device TV camera, and then it is digitized in the computer.

The Influence of Mental, Emotional and Spiritual Processes on GDV Images
Geopathic Analysis

An interesting aspect of GDV applications is the research into consciousness processes. Many years of experimentation have made it possible to identify Biophotonic imaging of altered states of consciousness (ASC) [Bundzen et al, 2000; 2002]. These are particular states, which a person enters during meditation, mental training, religious ecstasy, or when under the influence of drugs, psychedelics or anesthesia. For many years the energy of Russian extrasensories, Chinese Qi-gong masters, and healers in the USA, Russia and Germany has been measured. Nearly all of these observations produced signs of Altered States of Consciousness (ASC). Similar results, using the most diverse devices and methods, were obtained in the laboratories of different countries [Radin, 1997; Milton, 1996]. This shows that the processes of consciousness are apparent on the physiological processes measured by the GDV method.

Physical devices, such as the GDV Eco-tester, and the Fifth Element (today it is GDV SPUTNIK), are also used to measure physical processes of the material world. This relates to biology as much as to physics and chemistry. Therefore, only influence of consciousness on physiological or physical processes can be measured. This influence is conveyed along several channels, primarily through the cerebrum, which takes an active part in thought and emotion processes. The brain produces a cascade of chemical substances, which influence physiological processes, and also the central nervous system models the work of the autonomic nervous system [Wisneski, Anderson, 2009].

The GDV camera was initially designed for and used in assessing the level of performance alertness of Russian Olympic athletes [Bundzen et al., 2003, 2005]. The Russian Ministry of Sport, decreed that an GDV/EPI system would be integrated into the practice of testing athletes.  Today, sports teams around the world use the GDV technology to evaluate and improve athletic performance.

The GDV Sport and Qualification Programs make it possible to:

Dynamically determine the psycho-physiological potential of an athlete so as to effectively control the level of functional reserves and the quality of health during the training process
Ensure rapid diagnosis of resilience to stress and the quality of mental and psychological energy mobilization in order to predict the success of athletic performance and other activities which place an individual under a great deal of stress
Perform a differentiated rating assessment of the psychological and physical potential of a group of athletes studied for selection and training purposes, for making timely corrections in the training process

and more for IUMAB Members